Many Masters Of The Universe fans have found inspiration in the minicomics which came with the vintage line toys. Several series of minicomics were written, but it was the first and second series which provided the best and most imaginative exploration of the world of Eternia. I have written about these tales at length on this site, and readers of my Grayskull Saga will already know how important the minicomic themes were in shaping my own fan fiction.

I can write stories when the mood hits me and the time is available, but illustrating my own work was something which always eluded me. I am not an artist, so I knew that it would never be possible for me to draw pictures of a good enough quality for such a project. But I really wanted to write my own minicomics!

Any illustrations by me were going to have to be created in a different way. The images in these new stories are photographs of Classics figures placed against backgrounds rendered in 3D software with a few Photoshop Elements tricks thrown in. I use Vue, Daz Studio and, to a lesser extent, Bryce.

By putting pictures together in this way, I have been able to achieve the ambition of creating my own Masters Of The Universe minicomics. I hope that fans enjoy the stories, which, incidentally, are completely separate to my other stories on this site. It has been fun creating new Masters stories, as well as gradually finding out a little more about creating 3D art.

There are five minicomics on this site. You can find them all from the main page, but I wanted to include this page to explain a little about the stories and to reveal some tributes to the original minicomics. These stories are a thank you to the visitors who have supported this site over the years. 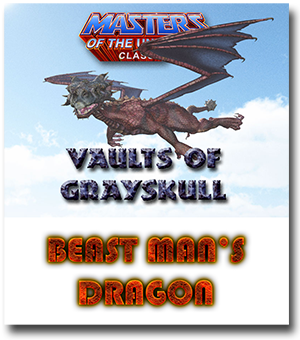 My first go at creating a Masters minicomic! This was experimental in several ways. It was my first proper project using Vue, and I really had no idea whether it would work at all.

As my vision of Eternia is based predominantly in the pre-Filmation (or Mineternian) era, the Sorceress is the version who wears the snake armour. This is, of course, the way the story was portrayed in the first two series of original minicomics.

I always thought all of the villains should be sinister and powerful on Eternia. I don't particularly like the dumbing down of certain characters (including Beast Man) that has taken place over the years. Remember The Power Of... Point Dread!? Beast Man was the only one who realised He-Man's plan to defeat Skeletor.

I thought Beast Man deserved to be the lead in one story, so Beast Man's Dragon was born. I think my favourite image from this one is when Mer-Man watches Skeletor's meeting on the first page.

It was also important for me to have a dragon featured in one of my minicomics. Dragons were an important part of the Grayskull Saga and they are the ultimate fantasy creature, so not having one was not allowed! 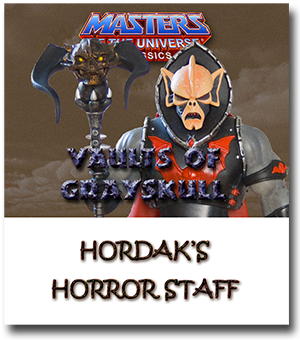 Where would we be without the Four Horsemen? The designers of our Classics figures had to be acknowledged somewhere in these minicomics, and while their work is obviously featured in all five stories, I wanted to include something obvious.

Unfortunately, it took a beheading to show it, but I think the sacrifice was worth it! The moment I first saw the Aestorath Timekeeper figure from the Four Horsemen's Gothitropolis series, I knew I could use his head to create a weapon in the style of Skeletor's Havoc Staff for this story.

Enemies working together to defeat a common opponent is a much used theme, and I make no apology for using it myself. Readers of the Grayskull Saga will know that this is not the first time I have done this. Blurring the lines can be interesting!

I think using the term custom creation would be going too far, but I did have the opportunity to include a new member of the Evil Horde in this story, in the form of Morceg. This tale is rather uncharacteristic of minicomics in its style of ending which is something I did in the Grayskull Saga. 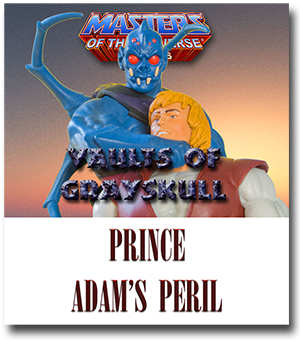 Prince Adam in a pre-Filmation inspired minicomic? How did that happen? Well, I might be a pre-Filmation fan to the core, but I also know that the Prince Adam story is extremely important to many Masters fans, and I wanted to offer something that recognised that those fans are as supportive of the Masters as the pre-Filmation ones.

I decided it might be fun to write a crossover story which could include both versions of the Masters canon. A favourite theme of many fans is the scheming of Evil-Lyn, so she is included in this story, as is another of my favourites, Zodac. This is not the pre-Filmation Zodac though!

I like the different scenery in this tale, but I think my favourite image is the cover. Webstor's malevolent gaze seems to work rather well. Webstor is one of my favourite characters and Classics figures.

I also thought it was only fair to give Orko the chance to get some magic right for once, so he proves to be very useful at one stage of the story. I have to confess (and this is a big admission for a pre-Filmation fan) that I rather like the Orko character. 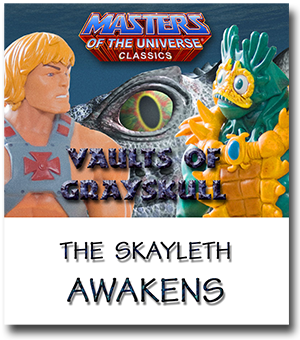 In one of the early minicomics, Battle in the Clouds, Mer-Man was a schemer, and this is the theme I used in this story. His title is Evil Ocean Warlord, so I am surprised at his portrayal in his Classics biography as cowardly. Mer-Man is one of the original characters, and a great favourite.

The Skayleth Awakens may draw from Battle in the Clouds, but the appearance of a new character, Bahkrullus, is actually a tribute to my favourite minicomic, The Magic Stealer!.

Those fans familiar with the first part of the pre-Filmation canon, He-Man and the Power Sword, will identify the use of a major Masters theme involving the Goddess. Of course, in that minicomic, she was referred to as the Sorceress, but one of the better Classics ideas has been to create a goddess character distinct from the sorceresses.

Making the images for this story was quite challenging because I was not sure how to create realistic looking underwater scenery, but I am happy with the results. As for a favourite image... probably the one where He-Man meets Precetus. 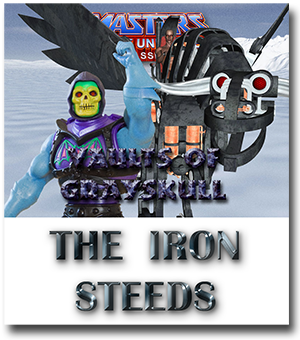 By the time I reached this one, I had created eighty illustrations plus four covers, so I was getting used to the process! That's why I probably like The Iron Steeds best for the scenery. I made more use of 3D models as background sets for this minicomic than any of the others.

I wanted to write a story that, like The Magic Stealer!, involved a journey northwards. I also included a tribute to the artwork featured in Battle in the Clouds. You will see what I mean on the page where He-Man finds Man-At-Arms.

There is another tribute of sorts in this minicomic. I thought it might be nice to recognise the work of Scott 'Toyguru' Neitlich somewhere in this tale, so the figure designed to resemble him (palace guard Lieutenant Spector) is featured on one page. Scott was instrumental in getting the Classics made, so this is a thank you to him.

I am pleased with several of the images in this minicomic. I love the scenery which Stratos is flying over when he sees Skeletor, and I also like the one of Trap Jaw as he walks with his men, but my favourite is a less obvious choice. It is the one where Randor and the Sorceress meet in the palace.