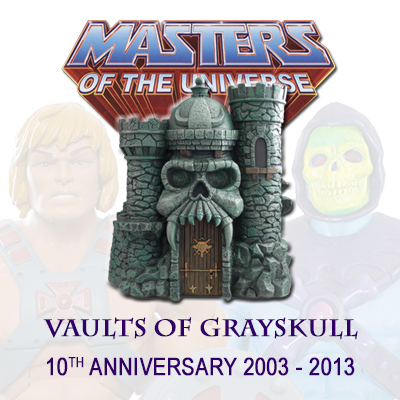 Mattel's good marketing idea of packing minicomics with MOTU figures in the 1980s had an unexpected benefit. Not only did children get to see pictures of new characters (thereby increasing sales of the toys), but they quickly began to identify with the short stories their toys came with. Perhaps to Mattel's surprise, the minicomics soon became as popular as the toys themselves. We know from interviews with the writers that creating a MOTU canon hadn't been the intention, but it happened anyway. It began with four stories, written by Donald Glut and illustrated by Alfredo Alcala. These were simple tales about a tiny handful of warriors doing battle on the wild planet Eternia.

Glut's stories spoke of a magical sword that was split into two pieces, a fortress which contained both magic and technology, and a fierce rivalry between the demonic Skeletor and the jungle-bred tribesman called He-Man. There were other characters too: Man-At-Arms, the weapons master; Teela, the beautiful warrior woman; Stratos, the winged fighter; Beast Man, the monstrous jungle-dwelling humanoid; and Mer-Man, the master of the oceans. The stories about this simple collection of heroes and villains were captivating to young minds, and MOTU fan fiction still draws on some of the elements introduced by Glut and Alcala.

It is still possible to track down copies of these minicomics over thirty years since their publication, but He-Man and the Power Sword is incredibly rare, and King of Castle Grayskull is almost as hard to find. Like me, many MOTU fans never got to see all of the minicomics when they were originally distributed with the toys, and have spent the intervening years tracking down the missing parts of their collections. Of the four Series One tales, I only had a copy of Battle in the Clouds as a child (not counting my French and German version of The Vengeance of Skeletor). I finally completed my original era minicomic collection with a copy of He-Man and the Power Sword just a few weeks before publishing these VOG tenth anniversary pages.

The Gary Cohn minicomics expanded the ideas found in Glut's stories. Eternia was portrayed as a rustic kingdom under the leadership of an elderly monarch. The toyline had expanded a little by this stage, and in the Series Two minicomics we met new favourites such as Ram-Man, Man-E-Faces, Trap Jaw and Tri-Klops. The concept of a Sorceress, which Glut had already introduced, was given more substance. The Sorceress sometimes asked a falcon named Zoar to pass messages to He-Man. The wilderness of Series One was still present in Series Two; more beautiful perhaps, but still as dangerous.

The Cohn stories were more widely distributed than Glut's, and therefore more accessible. My interpretation of Eternia was based almost exclusively on the four Series Two tales I owned at the time: He-Man Meets Ram-Man!, The Ordeal of Man-E-Faces!, The Magic Stealer! and The Power of... Point Dread!. The best of these (and the entire series) is The Magic Stealer!. The best MOTU monster, the glorm, was featured in He-Man Meets Ram-Man!, and The Magic Stealer! is memorable for He-Man's encounter with the giant god of the inner-world, Procrustus.

Most of the Series Two minicomics can still be found on Ebay fairly easily most of the time. The Menace of Trap Jaw! and The Terror of Tri-Klops! are harder to find. The most elusive is The Tale of Teela!. I was glad to complete my Series Two collection when I finally tracked down a copy of this story. These seven tales, along with Glut's four, make up the canon of the pre-Filmation cartoon era. The later interpretation may have lasted longer and drawn more young fans to the MOTU, but it wasn't the best version of the story.