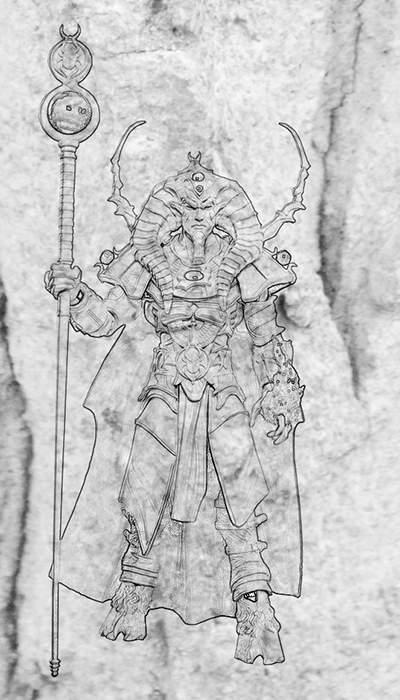 SCARABUS - LORD OF THE RESURRECTED

Even though the two lines are very different, I actually think they are complementary. It really doesn't matter whether you collect Scarabus to join your Classics or as a stand-alone set. They are great figures and possibly the Four Horsemen's best designs so far... with the exception of the Classics of course! I have to say that as a MOTU fan, but it's a close call!

I bought most of my Scarabus collection from the Four Horsemen's Store Horsemen website. You can find several of the Horsemen's designs for sale here, including the great Gothitropolis Timekeepers. If you have Scarabus, you have to have his little evil sidekicks! The guys are really good at making sure orders are sent out quickly.

I also want to thank Ryan 'Buzz' Bussey for supplying me with an Anubos figure. Ryan sells evil warrior figures from different toylines on his Hyve of Villainy site. Digital River could learn a thing or two from Ryan about looking after customers! I am glad to recommend and support Ryan here on Vaults. I am still after some more Anubos figures though, so please send me an e-mail (eyasstormwolf@aol.com) if you have an unopened Anubos for sale.

Here is the complete list of the twelve Scarabus figures:

It is the heads and paintwork which distinguish the individual Scarabus characters. The body, limbs and clothing are the same for each figure. You might think that such extensive use of the same parts might spoil the set, but this is not the case. In fact, it brings character to the set in the same way that reuse of the Classics moulds does.

Each Scarabus figure comes with numerous parts, including pincers and three sets of hands (closed fist, grasping hand and spellcasting hand). These parts can be swapped around, although the pins which hold them in place are quite small, so frequent changes might cause the joints to loosen. The figures have a lot of articulation and can be posed to a greater degree than the Classics.

The photographs above show the main Scarabus character. As you can see, the sculpting detail and paintwork is very intricate. It is obvious that a lot of work went into this design. This isn't the same as the exaggarated proportions that we saw in the 2002 MOTU figures; it is stylish and refined work that is nothing but complementary to the characters. The opponent in the photograph on the right is NECA Hordak.

Among the accessories which come with every figure is the Scarabus staff. A spear head is also supplied. Both are shown in these photographs. Spellcasting flames are also included. While I tend to think plastic flames look more like squashed fruit than anything else, I happen to know lots of fans love them! Not shown here are the armour pieces and spear heads for the Gothitropolis Timekeepers, which also come with every Scarabus figure.

Light Talisman Scarabus (left) and Dark Talisman Scarabus (right) were the first figures to be sold. Only two hundred of each were made. Half of these were for the Four Horsemen Toypocalypse show in 2011. These items were sold with black or white scarab badges attached to the front of the packaging. The other half were allocated for sale on the Store Horsemen site and had gold badges (as seen on the image at the top of this page) on the packaging.

Demon Fire Scarabus (left) and Dormant Form Scarabus (right) are great variants. You will notice that the faces are slightly different. This is another good feature of the Scarabus set. Every figure includes at least one extra face or head. The colour choices of the figures are really impressive. Sometimes the colours are complementary; sometimes they are contrasting, but both schemes work very well.

Several of the Scarabus variants have heads which are obviously different from the main Scarabus design. Here we have Melchom, who has a great sinister glare. Melchom, like the other variants, comes with the Scarabus horned head, so you can have another Scarabus variant instead of the Melchom character on display. The faces from each head can be swapped too.

The great horns protruding from Nergall's head are similar to those found on Aestorath (one of the Gothitropolis Timekeepers). I think this character seems much more alien in appearance than the other variants, which are more reminiscent of Earth mythology. The main Scarabus theme is inspired by Ancient Egypt, as the next variant shows.

Anubos has proved to be the most popular Scarabus variant, having been the first to sell out on the Store Horsemen site. He is inspired by the jackal-headed Ancient Egyptian deity Anubis. The colour scheme is very close to Scarabus's, and I suspect some fans bought him as an army-builder figure for Scarabus to lead. I think the Four Horsemen should produce a second run of Anubos!

Another Ancient Egyptian-inspired figure, Horos is based on the falcon-headed deity Horus. The face seems a little too big for the rest of the head, but it is nonetheless a nice design. Horos seems less menacing than the other Scarabus figures.

The goat-headed Azazel has one of the best action figure heads I have seen. The name is featured in the mythology of several religions. Azazel seems like an obvious candidate for Classics army building. The detail on the goat head is very good, and the Scarabus face is striking too.

The goat-headed Haures is another finely-detailed figure. The dark colours contribute to the demonic appearance of this character. This is another figure which would cross over well into a Classics army.

Thothos is another figure which has obvious links to Ancient Egyptian mythology. Thoth was an ibis-headed deity who was worshipped as the god of knowledge and writing. Interestingly, one of Thoth's roles was to mediate in conflicts between good and evil, so perhaps we have a Scarabus version of Zodac - if you subscribe to that version of Zodac of course!

I think it is important to add that not only do the Scarabus figures look good due to the level of detail and great paintwork, but they are also made well. This line is definitely worth considering if you are thinking about collecting some non-MOTUC figures. Make sure you visit the Store Horsemen website to see Scarabus as well as the Four Horsemen's other figures. 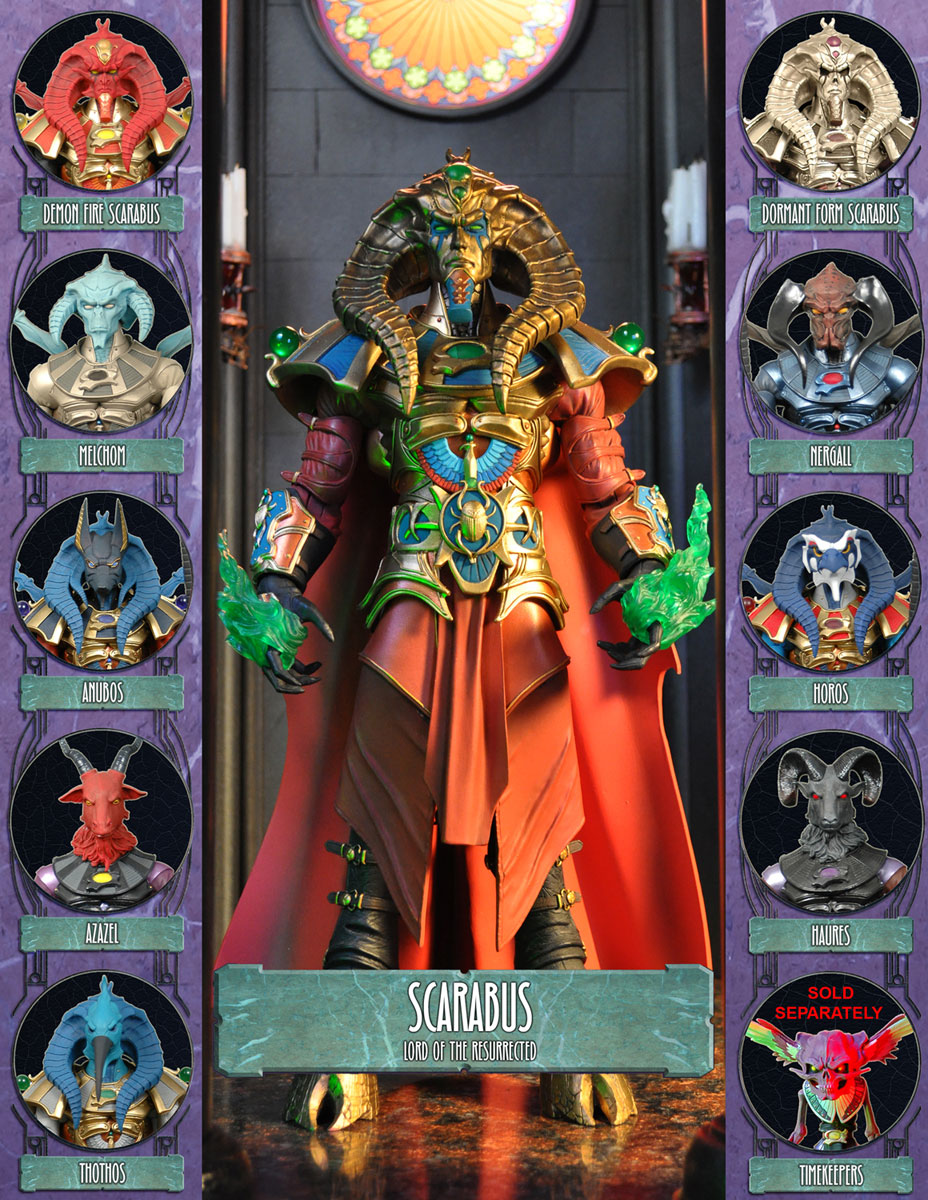