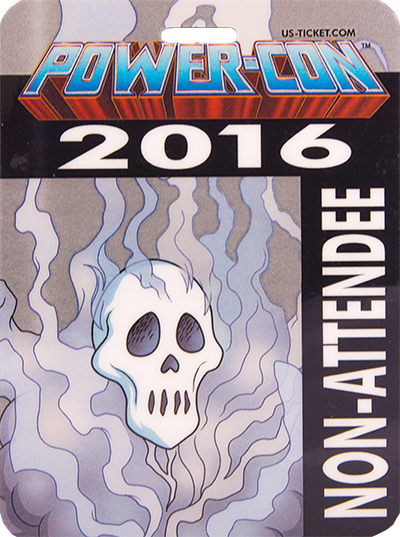 Power-Con is a convention for Masters of the Universe enthusiasts organised by Val Staples and his dedicated crew of volunteers. It's an event at which fans get the chance to meet artists, designers and each other, and it's become a rather celebrated occasion in the fandom. This page isn't about the event itself though; I'm reviewing the three exclusive figures which were key to the 2016 convention's success. For more information about Power-Con, see the Power-Con website.

But first, just a little background. The Classics have, almost without exception, been sold on the Matty Collector website. This has included convention 'exclusive' figures and items which haven't been part of the various subscriptions over the years. The few exceptions have been things like the Toys 'R' Us figures.

When it was announced that three very important Classics figures would only be made available through the 2016 Power-Con, I was concerned that the majority of fans would miss out. We weren't talking about some obscure characters no one cared about either; the convention items were highly significant in MOTU lore. But I needn't have worried. Val came up with a plan.

It was decided to sell the exclusives through the website for both attendees and non-attendees. There was a little bit of trial and error initially while the demand was being evaluated, but ultimately everyone was able to order multiple figures ahead of the convention. They were expensive compared to the Matty Collector prices, and had to be paid for months in advance, but that was understandable and acceptable considering the limited quantity of product and the work involved.

After my early reservations, I'm delighted to say that it all worked out swimmingly. Val and his team made it possible for fans to add fantastic figures to their collections and, by all accounts, pulled off a very successful convention too. Maybe one day I'll be able to make it across the pond and attend one myself.

But back to the figures. Which were chosen? Well, the Power-Con figures were definitely the best Classics of 2016: minicomic (red) Beast Man, snakeman variant Camo Khan, and minicomic (green) Granamyr. I think you'd be hard pressed to make a selection that better represented the origins, depth and lore of the Masters of the Universe than these three. Let's take a look.

(RED) BEAST MAN. In the very first minicomic (He-Man and the Power Sword) Beast Man was drawn by Alfredo Alcala all in red, presumably because he was working from a prototype. The cross-sell art on the back of the minicomics also presented Beast Man this way. During the life of the Classics we've had very few figures which go back to the origins of the Masters, so it's a pleasure to receive one more.

The figure is a repaint of the standard Classics Beast Man, but I use the word 'standard' loosely because both the original and Power-Con versions are anything but ordinary. The variant works because subtle dark shades have been brushed into the cracks, giving texture and character. (A plain repaint would have been a disaster.) The gold tribal medallion stands out nicely, and I love the piercing yellow eyes. The original Classics Beast Man looked fierce; this one looks maniacal. If you have a Skeletor figure with the Alcala head, you can now display the master and his underling as though they've leapt from the pages of that pivotal minicomic.

CAMO KHAN. When Mattel was producing the original Masters of the Universe figures in the eighties, a few licensed variants were also made. One of these was an Argentine version of Kobra Khan called Kobra Khan Camuflado (camouflaged Kobra Khan). With his Buzz-Off claws and gold paint, this obscure fellow became rather celebrated, and there was a lot of support for producing a Classics version. Thankfully that's now happened.

I love how Camo Khan turned out. I'm a big fan of the original Khan and loved how he was reinvented for the Classics, so having the gold clawed variant as well is a treat. My only disappointment is Camo Khan didn't come with the extra head we had with Kobra Khan. This figure has been produced really well, and I love the paintwork. He could possibly be the only Masters of the Universe variant that comes close to surpassing the figure upon which he's based. It's a very close call.

(GREEN) GRANAMYR. The ancient dragon appeared in a minicomic called Dragon's Gift and quickly became a fan favourite. He also appeared in the He-Man and the Masters of the Universe cartoon series. In the minicomic he was green; in the cartoon he was red. The red version was released in the Classics line, and was done very well, but there were calls for a Granamyr that was true to the minicomic colour scheme. We now have that version.

I should say that I always thought Alfredo Alcala made the minicomic version look absurd: he had a scrawny neck and oversized head; more clown than wise sage. The design of the Classics Granamyr addressed those issues well, and it's a repaint of that design we now have as the minicomic version. You'll have noticed I've made the photograph bigger than I normally do for figure images on this site. That's because I wanted to show you clearly how extraordinarily good the paintwork is on Green Granamyr. The red one had character but pales in comparison to this one.

This giant figure is one that can be appreciated on two levels: we have a valuable character from MOTU lore and an aesthetic masterpiece. The standard has now been set for future figures.