Approximately twenty years after the original Masters Of The Universe toyline was introduced, Mattel decided that the time was right to revisit the world of Eternia. The Four Horsemen, who were Masters fans and well-established toy designers, were given the job of reinventing the characters of the vintage line. The line was released in 2002. It is referred to as the 2002 era, although many fans use the name 200X to describe this incarnation of the Masters Of The Universe. This page relates to the toys produced by Mattel. For information about the mini-statues produced under licence by NECA, click here.

The 2002 toys stayed true to many of the themes from the original series. He-Man still battled against the evil Skeletor, preventing the skull-faced demon from entering the mystical Castle Grayskull. The figures were redesigned, but they were still instantly recognisable. The designers worked hard to create new versions of the toys, but their themes seemed more manga-cartoon than serious swords and sorcery. Their designs were more intricate than the originals, but the fundamental flaw was their cartoon-styling. They also had very little articulation. Many of the figures were designed in a pose, which instantly limited their use.

So what we ended up with was a line with an identity problem. It was released for children, but did not have the articulation of modern toys. At the same time it was also trying to appeal to adult collectors, but not everyone enjoyed the manga styling. Perhaps the line was simply trying to be too cool. We had toys that were too statue-like to be toys, and collectibles that were too young-looking to be collectibles.

One significant difference between the 2002 figures and the old was the link to the cartoon series. Rather than the animation being created after the toys (as happened in the 1980s), the new toys and cartoons were developed together. This proved to be an unsuccessful approach, and ultimately limited the potential for development. It also undermined the mythology that was such a fundamental part of the original toys.

The line had some commercial success, but it did not last very long. There were several theories put forward as to why the 2002 line failed, but there are two arguments that I believe stand above the rest. Firstly, there were many He-Man and Skeletor variants, which left little room for other characters. This was a repeat of a mistake that was made on the original line. Secondly, the Lord Of The Rings films turned the population of the world into epic fantasy fans, while Mattel was trying to launch a line of toys that looked like they jumped out of a Japanese comic. Did they really not see that coming?

I have read that the Four Horsemen, who designed the 2002 toys, were disappointed with fans' reaction to their He-Man design. I am not sure how true this is, but I sense that He-Man was generally seen as the least interesting figure from the line, even by the 2002 fans. I know why I do not like the He-Man of this era, and I have two main reasons. The first is the radical departure from the origins of the character. There should be no surprise that turning a strong-man barbarian adult into a teenager was not to the taste of all fans. My second reason is the design itself, with its hunched back and protruding head. Here are some images to show you what I mean.

Below are two photographs of figures in their packaging from the 2002 line - Battle Sound He-Man and Skeletor. Battle Sound He-Man was obviously one of the many He-Man variants and represents what was wrong with the line. By contrast, Skeletor was much better. The original figure (before the variants arrived) was actually a fairly good interpretation of the character. You can see the level of sculpting detail that went into this figure. Some fans prefer the 2002 styling to the original, and I can understand why. The figure still suffers from being out of proportion, but he does look malevolent. Skeletor was given a new title for the 2002 line - Overlord of Evil.

If there is one thing that proves to me how misguided this line was, it is the printing on Skeletor's packaging which says Awesome Sticker Included! That is delusional - either that or the person who wrote it did not understand what 'awesome' means. Sometimes you have to accept that something simply is not as good as you think it is. 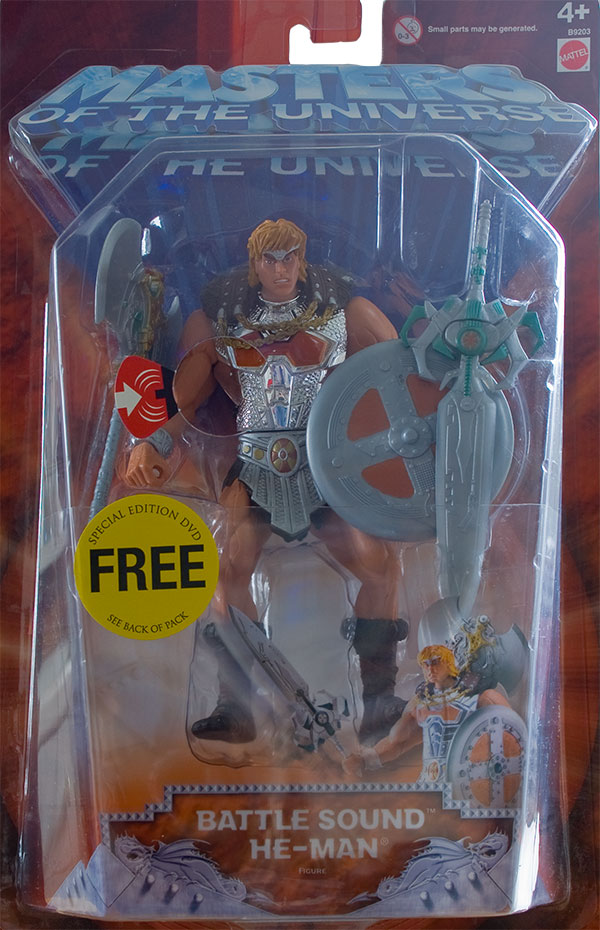 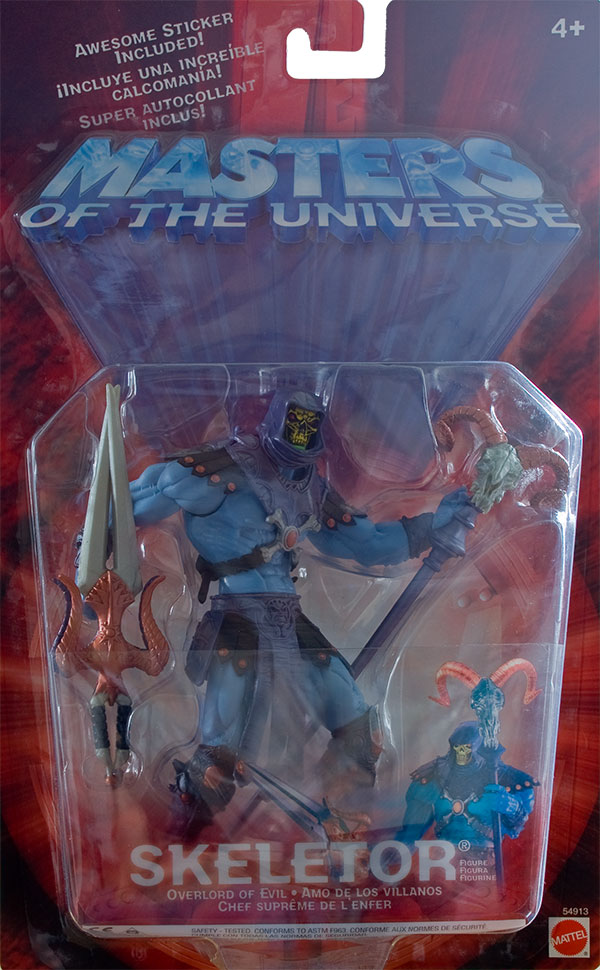 Finally, here is a new photograph of the 2002 He-Man. This shows the techno-sword, which was another huge departure from the original Powersword, but many fans really like it. Also shown are the over-sized shield and axe, which were characteristic of the line as a whole. When this line first appeared, I really wanted to like it, but I couldn't! Nonetheless, I am glad the 2002 line does have many fans, and in some ways these toys opened the door for the Classics line which started in 2008. Fortunately the NECA mini-statues, which replaced the Mattel toys, were of a different quality. 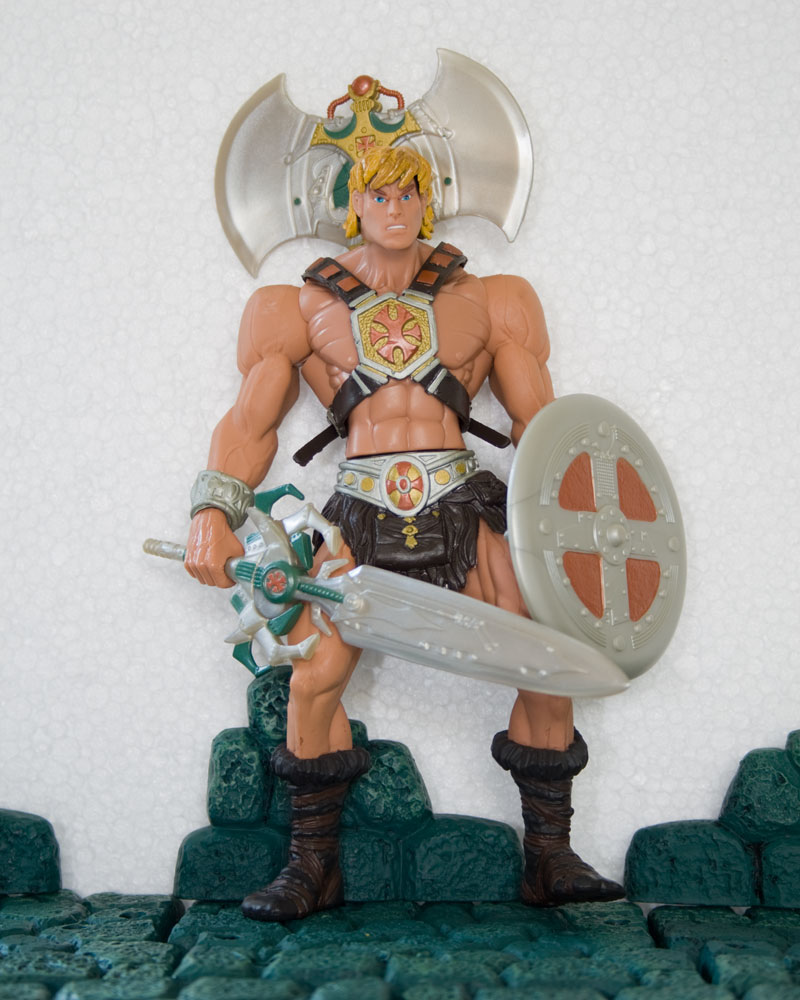