The Evil Horde was an exciting addition to the Masters Of The Universe. This faction of evil warriors under the leadership of Hordak was an interesting way of crossing the boundary between the original line and the Princess Of Power line, helped largely by the She-Ra cartoon. While the toys were released as a later part of the original line, the background story connected Hordak with She-Ra on the planet Etheria.

This was a clever move, because the Evil Horde were MOTU figures for fans (like me) who only wanted the original toys, but they also established a link to the POP line that would still be going strong when the Classics line arrived in 2008. It was possible to choose between Horde stories on either Eternia or Etheria.

The arrival of Hordak created a new background story for Skeletor, and this had the potential for returning to the imagination of the second series of minicomics. I can only wonder how great the original barbarian canon might have become had Hordak been created at the start of the line.

The toys were a collection of creatures even more bizarre than some of Skeletor's cronies. As the Horde appeared about halfway through the life of the Masters, the faction never really had the chance to grow, but the characters were memorable and have attracted a wide following.

The list that follows gives the names of the Horde Warriors from the vintage line with a short description of their skills. 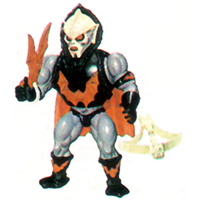 Hordak was one of the best designed toys of the line. He was given grey skin when released as a toy; in the She-Ra cartoon his skin was blue. The bat symbol helped establish a link with the animal, and the red object was supposed to be a creature perched on his arm. 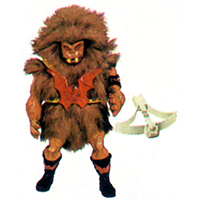 Grizzlor was a fearsome bear creature who was supposed to be a legendary monster described in fairy tales to make Eternian children behave, but it turned out he was real! 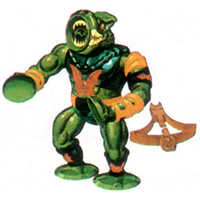 Leech was a monstrous swamp creature who trapped his prey with the power of suction. 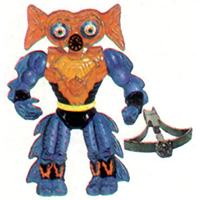 Mantenna was a bizarre creature with eyes that extended on stalks. His design suggests he was four-legged, but his pairs of legs were fused together for the toy. 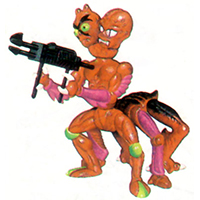 Modulok was a creature of many parts, which could be rearranged into different creatures. This was a good idea and something new for the Masters. 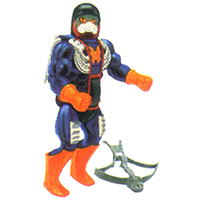 Dragstor was a peculiar creation with a wheel in his body that was used for high speed travel. 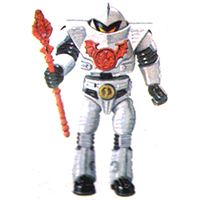 Horde Trooper was an army builder robot figure. It was designed to collapse. Hordak presumably had a lot of these robots. 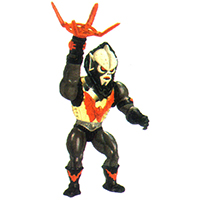 Hurricane Hordak was the first Hordak variant and featured an arm attachment weapon. 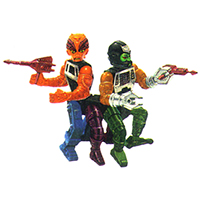 Multi-Bot was a robot version of Modulok. The figure had a fairly basic building block design, so it was not as good as Modulok. 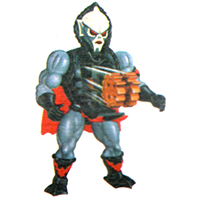 Buzz-Saw Hordak was the second Hordak variant and featured a saw weapon which extended from the figure's chest. 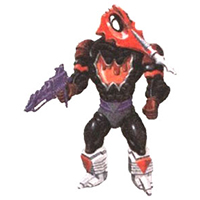 Mosquitor was a mosquito humanoid who had a clear chest containing liquid 'blood', supposedly sucked from his enemies.