When the Masters Of The Universe toys were released in the early 1980s, there were two distinct factions: the Heroic Warriors and the Evil Warriors. Although I have used an image of the King Randor figure on this page, he was actually one of the last figures to be manufactured. From almost the earliest days, though, Eternia was shown to be a kingdom. The Heroic Warriors were in the service of the king, so that is why King Randor appears here.

The presence of a king was not made apparent in the very earliest minicomics, but by the excellent second series, Eternia as a kingdom was very much established. An elderly king was featured in several of the stories, but He-Man was always the focus. He-Man was, of course, one of the original figures. An alternative version of He-Man with special armour was released fairly quickly (Battle Armor He-Man), and when the original barbarian themes were dropped in favour of the more child-friendly super-hero stories, we met He-Man's alias, Prince Adam.

The Heroic Warriors were a diverse collection of characters, charged with the defence of the realm. They were extremely loyal, and themes of trust and friendship were often described in the various media connected with the Masters. Although we saw new enemy factions later on, the original good versus evil theme remained consistent.

The list that follows gives the names of the Heroic Warriors from the vintage line with a short description of their skills. 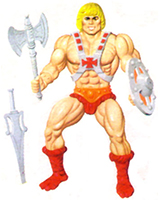 He-Man was originally portrayed as a barbarian warrior from a jungle tribe who became the chief defender of Eternia. This was adjusted early on and he became the secret identity of the king's son, Prince Adam. 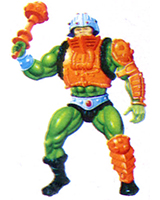 Man-At-Arms was the master of weapons who was later shown to be an inventor. In the early days of the MOTU, there was no suggestion that the characters had other names. The cartoon changed that for Man-At-Arms though, and he was named Duncan. 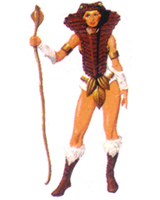 Teela was released as a warrior goddess figure who, in the early canon, was cloned to produce a daughter of the same name. The daughter version became captain of the royal guards. For some fans, Teela is the true Sorceress of Castle Grayskull. 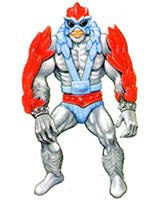 Stratos was the winged warrior who was an early ally of He-Man, although very early illustrations actually showed him in Skeletor's company before his character was finalised. 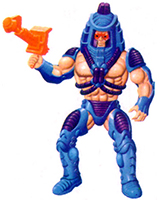 Man-E-Faces was among the second set of Heroic Warriors. He was an actor who was poisoned by Skeletor, and ended up with a sinister monster and obedient robot trapped inside his body. 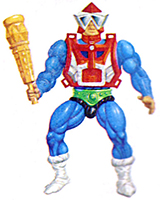 Mekaneck had the ability to extend his neck (which was mechanical) in order to see over obstacles. 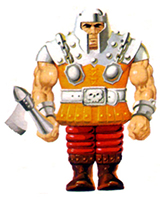 Ram-Man became He-Man's ally after Skeletor had deceived him and forced him to try to break into Castle Grayskull using his battering ram ability. 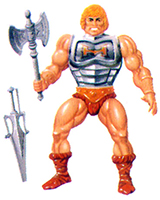 Battle Armor He-Man was the first He-Man variant and had a rotating section in his chest which showed different levels of battle damage. 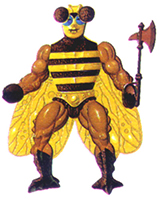 Buzz-Off was a humanoid bee creature. His wings had a technological design on them, which has always seemed out of place. 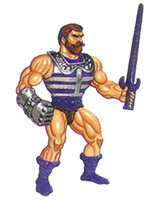 Fisto was an older warrior and a master of hand to hand combat. He wore a great steel gauntlet on his right hand. 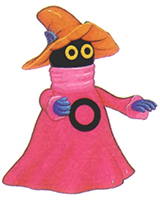 Orko was a tiny alien from another world (identified as Trolla) whose magical ability did not work so well on Eternia and often got him into trouble. 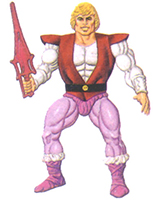 Prince Adam marked the great shift in the canon from its barbarian origins when he was introduced as the secret identity of He-Man. 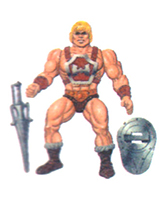 Thunder Punch He-Man was the next He-Man variant and not particularly interesting. 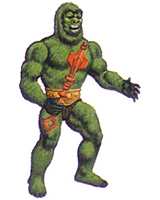 Moss Man was a blend of human and plant who was not originally portrayed as a nature god, but his origin fitted that theme perfectly, and this became his adopted background. He was a green flocked version of Beast Man. 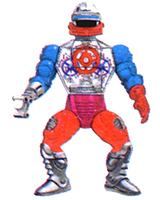 Roboto was a machine invented by Man-At-Arms to protect Eternia. After running into some trouble with Skeletor, who took away the heart he had been given, Roboto was afforded magical protection by the Sorceress so he could remain one of He-Man's allies. 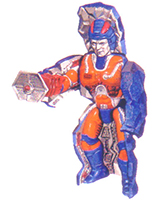 Rokkon was an alien humanoid made from rock who came to Eternia in search of He-Man. 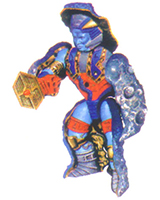 Stonedar was the leader of the Rock People and Rokkon's companion. 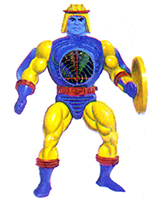 Sy-Klone was a humanoid who could fly and create whirlwinds by spinning rapidly. 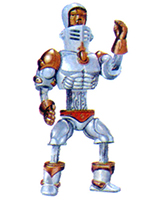 Extendar could extend his limbs to gain extra height and reach. The line was getting tired at this stage. 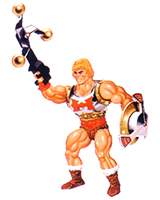 Flying Fists He-Man was yet another He-Man variant. 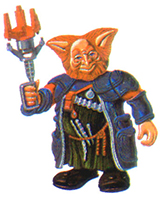 Gwildor was a grotesque dwarf character that was featured in the dreadful He-Man movie and was made into a toy as a result. 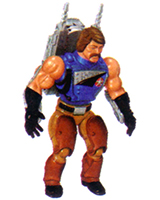 Rio Blast featured firearms which extended from his body. 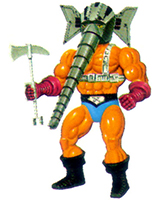 Snout Spout was an elephant-headed humanoid who could squirt water through his trunk. 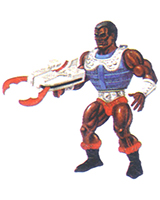 Clamp Champ was a human character who carried a large mechanical claw device which he used to capture his enemies. 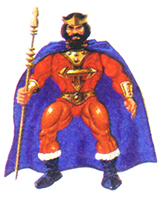 King Randor was finally released as a toy, giving the Heroic Warriors the king of Eternia at last. 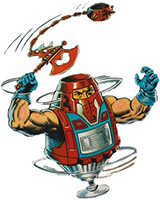 Rotar was a peculiar rotating thing which struck enemies with his spinning weapon. 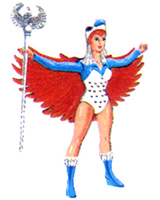 Sorceress was the version from the Filmation cartoon who turned into the falcon Zoar. Zoar was a male fighting falcon when originally released. 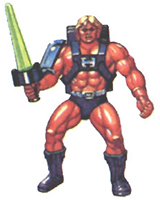 Laser Power He-Man was a very poor He-Man variant, released only in Europe, whose mould was of low quality and a warning about the impending introduction of the He-Man (New Adventures) line. 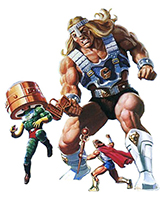 Tytus was a giant heralded to introduce the Powers Of Grayskull line, which never really got going. Tytus was a European-only release.