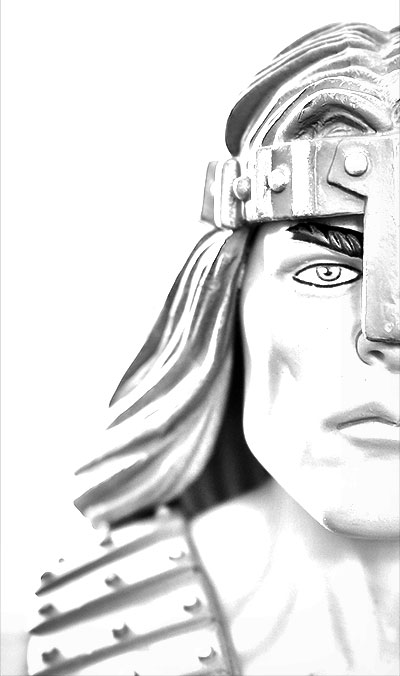 The inclusion of Tytus in the Classics line has, despite my misgivings about the quality of the figure, made me have a think about just what it is that makes Eternia a magical place in the minds of the fans. I write this from a purely subjective point of view, although I am confident that many fans share my thoughts. So what is it about Tytus that has prompted me to add this page to Vaults?

Actually, it is not Tytus himself, rather it is what he represents. Tytus just happens to be the first giant figure of the Classics. Megator was released after this page was first written. December 2012 saw the release of Procrustus (the elemental god of the inner-world featured in The Magic Stealer! minicomic), and Granamyr (the dragon who appeared in the Dragon's Gift minicomic and four Filmation cartoon episodes). Having these giant figures in the Classics line reminds us how much we are fascinated by larger than life characters.

There is no absolute definitive description of Eternia that I can give - every fan's interpretation is different - but it is always a place of magic, grand forests, desolate landscapes and mighty oceans. It is a place of mythology, and as with our own world, myths and legends are subject to personal interpretation. The Eternia I imagine is inspired by the early minicomics, but not exclusively so. Read posts on MOTU forums and you will quickly realise that personal interpretation is a big part of what makes fans enjoy Eternia.

Eternia has always been about extraordinary characters. It is the nature of fantasy figures that they are bigger and bolder than their regular human counterparts. Archetypal qualities, which we can only hope to aspire to ourselves, become personified in legendary characters. The dark side of life is similarly magnified, thereby making the villains more terrifying and more dangerous than even the worst of our own kind.

Legends of yore reflect this insight into the human condition. The quests of King Arthur's warriors are metaphorical journeys that enlighten us with a greater understanding of who we are. Many such legends exist around the world. They are not stories to be taken literally; they are there to show us something about ourselves.

Eternia has many of these larger-than-life characters. Heroes such as He-Man and Man-At-Arms are powerful protectors of the ordinary citizens, and even if you subscribe to the Prince Adam version of the Eternian tales, he is an ordinary character who transforms into someone extraordinary by magic. The demons are terrifying wielders of dangerous magic, with Skeletor and his minions constantly threatening the tranquility of the planet.

We also come face-to-face with deities in our extraordinary MOTU world. From the earliest days, elemental power and mystery has been written into the Eternian mythos. The mysterious Goddess, who chooses the heroes of Eternia, appeared to He-Man in the first minicomic. Moss Man, an Eternian Green Man nature god, is another elemental being who has extraordinary power.

We encounter spectral figures (Scare Glow and Eldor), half-animal entities with dominion over animals (Mer-Man and Beast Man), and even beings who are half-mechanical (Trap Jaw and Mekaneck). There are many characters who are able to wield magic, both for good and for evil.

These incredible characters inspire fans' interpretations of Eternia, and have done so since the days of the original toyline. The Classics continue to provide that inspiration. And so I return to the point I made at the start of this page - why is it that the giants of Eternia have prompted me to look at why this fictional world is such a special place?

Giants represent something even more extraordinary in an already extraordinary world. They stand above the archetypal heroes and villains both in a literal sense and in the fact that they are even more powerful than the already mighty beings who scamper around their feet. Giants have been a keystone in mythology for as long as Man has seen mysterious shapes in the wildness of the landscape. Knowing that the amazing world of Eternia is home to giants makes it even more incredible.

I love the fact that giants are part of the fabric of Eternia. The Tytus figure may be a colossal disappointment with his lack of articulation and awfully-designed boots and legs, but Tytus the character is something altogether different. He is a mighty personality in an elemental world - the world we first glimpsed in the The Magic Stealer! minicomic. That is why my Eternia - and hopefully your Eternia - continues to inspire. Eternia is a fantasy world just like those of literature and computer games. It is a land of giants.

Tytus and Megator did appear as figures towards the end of the original MOTU line. They weren't particularly good; in fact the line as a whole was suffering from hit or miss quality by that stage. The Classics versions are limited in their articulation, despite being rather expensive. Tytus has a good face sculpt, but his legs and boots are poor. There is no ankle articulation and the shape of his boots gives him curved shins. This is particularly noticeable when the knee joints are straightened.

Megator is better. He shares Tytus's limited arm articulation, but his legs are closer to being realistic. One shin is more curved than the other, but overall the bare legs enforced a slightly better sculpting effort. He's an improvement on Tytus, and the zombie head (not shown here) was a decent accessory. Having an evil giant in the line has to be a good thing.


I had hoped Procrustus would appear in the Classics line ever since I realised that larger figures were being considered. Procrustus appeared in the best ever MOTU minicomic: The Magic Stealer! He is not just a giant; he is, in the words of He-Man, 'the god who holds the Inner World together with his many arms'. For MOTU minicomic fans, Procrustus represents the world that the Filmation cartoon replaced. Classics Procrustus has been painted an earthy yellow-brown, presumably because his green colouring in the minicomic is too similar to Megator's. It's actually a good design choice. Although he shares Megator's leg parts, his arms are fully articulated, and his rocky sculpt is excellent. He is definitely a better figure than Tytus and Megator.

Granamyr appeared in the Dragon's Gift minicomic, and his first Filmation appearance was in an episode of the same name. In fact the episode had the same poor storyline. It always made me wonder why it took He-Man so long to figure out that killing a sentient being just because he was asked to was wrong. In the minicomic Granamyr was green and was really badly styled by Alfredo Alcala. He had an enormous head perched precariously on a tiny, scrawny neck. In the Filmation cartoons, he was restyled a little and coloured red. This colouring was voted for by fans for the Classics figure. The end result, sculpted by the Four Horsemen, is really very good indeed. There have been some design issues (the sockets for the limbs have suffered cracking and splitting), but fortunately a dab of superglue here and there fixes these. Granamyr is a great giant figure.

Granamyr is the second Classics product to be distributed in a windowless box (the first was Wind Raider). Rudy Obrero did the artwork which appears on the packaging. His picture is very good, and I have added a scan below. 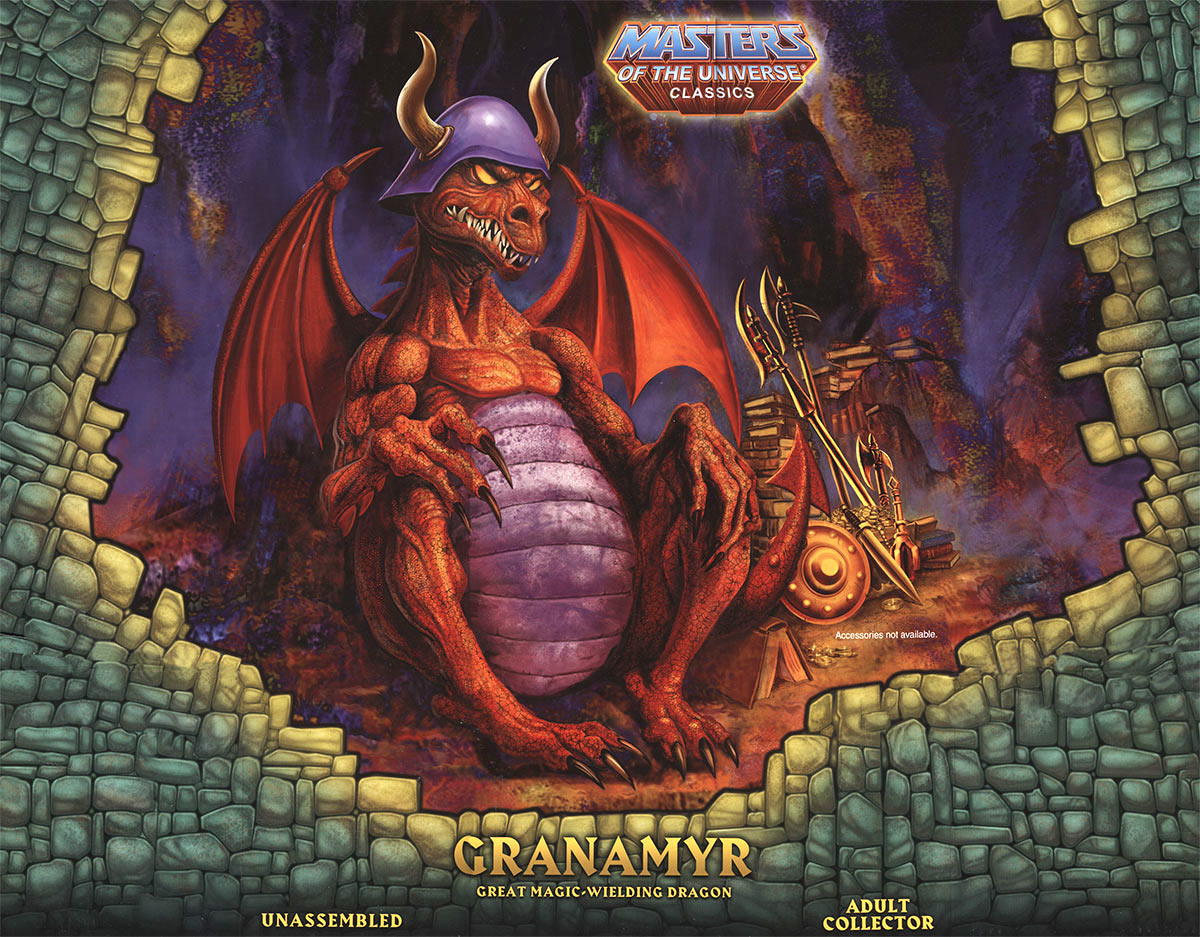