The first faction of malevolent warriors was under the leadership of Skeletor, a skull-faced demon who sought to learn the secrets held within Castle Grayskull so he could conquer Eternia. Skeletor was a brilliant idea, and much of the success of the Masters Of The Universe has to be because of him. In the earliest minicomic tales, Skeletor's origins were not explained, although it always seemed that he was Eternian. Later stories said he had come from another planet, but the story came full circle towards the end of the line when it was hinted that he was in fact the king's brother.

Skeletor's minions are generally referred to as the Evil Warriors, and there were some exciting characters produced, particularly in the first couple of waves of figures. Even at the end of the line, the sinister Scare Glow, who glowed in the dark, stood out as being a great toy.

One of the earliest evil warriors, Zodac, was taken out of Skeletor's team and turned into a neutral character. Later representations made him seem more helpful to He-Man, despite his supposed neutrality. Zodac is not one of the favourite figures among fans, and I think this was caused by removing him from the evil camp. He went from having a strong character to being rather pointless.

Another character who was moved from one team to another was Kobra Khan. When the Snake Men arrived, he became one of their warriors (in some interpretations of the canon). Tri-Klops was another character who was generally thought of as an evil warrior, although the minicomic which introduced his background portrayed him as a demon-hunting mercenary. Other characters remained firmly in the evil camp, and the likes of Trap Jaw and Mer-Man have been long-standing fan favourites.

There were later evil factions in the shape of the Evil Horde and the Snake Men, but Skeletor's gang remained the largest and most powerful. However the arrival of Hordak and King Hiss did add some interesting elements to the canon, and the story was developed to show that Skeletor had been Hordak's apprentice before banishing him from Eternia. Skeletor also released the trapped King Hiss in order to increase his chance of conquering Eternia.

The list that follows gives the names of the Evil Warriors from the vintage line with a short description of their skills. 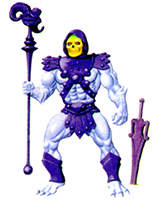 Skeletor was the leader of the Evil Warriors. The earliest minicomics portrayed him as an outlaw with a tiny band of adherents. This developed into him having an army by the second series of minicomics. He was later given a fortress called Snake Mountain. Connections to the king and Hordak were established later on. 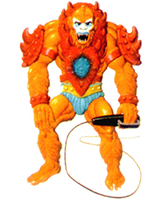 Beast Man had the ability to control animals telepathically. Often portrayed as a bungling idiot, this was not how Beast Man seemed in the earliest stories. He was always shown as fiercely loyal to Skeletor. 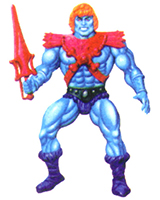 Faker was a robotic evil double of He-Man. There were always different interpretations of how Faker was supposed to work. A favourite idea was that Skeletor got his spell wrong when creating Faker and he turned out blue instead of looking like He-Man. However, Skeletor's magic could temporarily change his appearance; for long enough to cause mischief. Faker was the only figure to be re-released. 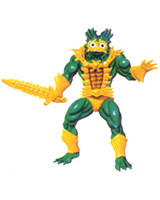 Mer-Man was a sea creature who could live both on land and under water. He was a warlord in the aquatic realm, although the extent of his power was never made clear as he was always in the servitude of Skeletor. 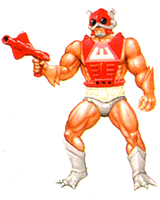 Zodac was a fantastic character when first introduced as an Evil Warrior. It was impossible to tell what was going on behind his mask. It was such a shame that his role was altered, because the story would have been much more entertaining if it had been left as it began. 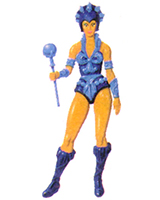 Evil-Lyn was the evil counterpart of Teela and a powerful sorceress. She was often portrayed as a schemer who was waiting for her chance to overthrow Skeletor. 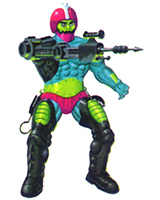 Trap Jaw was one of the best figures and has remained a fan favourite. He had three tools which could be attached to his mechanical arm. When he was introduced in the minicomics, he was a dangerous villain from another dimension, and it took both He-Man and Skeletor to defeat him. Sadly he became the comic relief in the cartoon, which was a huge downgrade. 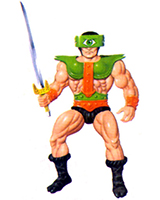 Tri-Klops was able to see in all directions at once due to the three eyes around his head. Each eye had a special function when rotated to the front of his head. It would have been good to keep him as a mercenary, but he quickly became one of Skeletor's servants. 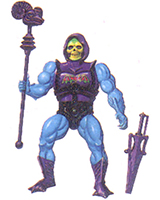 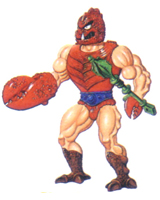 Clawful was a crustacean warrior with a sprung claw. He was an excellent figure who added another sinister element to Skeletor's gang. 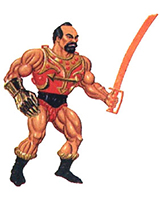 Jitsu was a martial artist whose right hand had a chopping action. He never became particularly prominent but has been popular among fans. 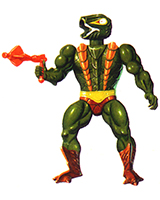 Kobra Khan was a serpentine creature who could spray a mist of water from his mouth. He joined the Snake Men when they arrived, probably to spy for Skeletor, although it has never been clear where his allegiance truly lies. 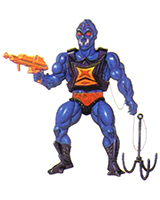 Webstor was a humanoid with spider eyes and a climbing mechanism built into his backpack. He was a sinister creature and a good addition to the Evil Warriors. 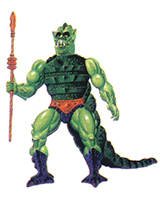 Whiplash was a reptilian beast whose method of attack was to strike opponents with his huge tail. 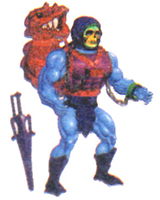 Dragon Blaster Skeletor was another variant of Skeletor. It was an interesting idea to have Skeletor carry around a small dragon. 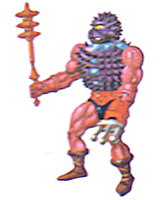 Spikor was covered with spikes, which supposedly made him a difficult opponent to fight. 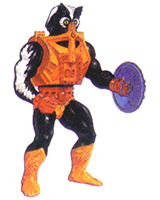 Stinkor was a Mer-Man repaint with Mekaneck's armour and a bad smell. He was obviously supposed to be a skunk creature. 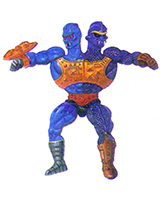 Two Bad was a double-headed creature who was supposed to be a strategist but was usually portrayed as constantly arguing with himself. The arm position on the toy was rather odd. 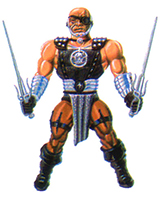 Blade was a rather boring character created as a toy after his appearance in the He-Man film. 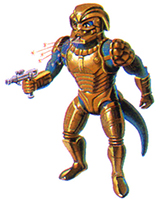 Saurod was a reptilian creature who could shoot sparks from his mouth. Another film creation. 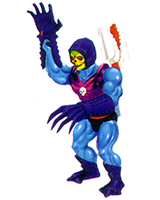 Terror Claws Skeletor was the next Skeletor variant and featured some clawed gauntlets. 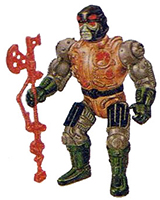 Blast Attak was a strange figure which was designed to fall apart. 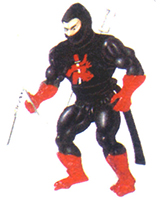 Ninjor was Skeletor's second martial artist. He never became particularly prominent because the line was reaching its end at this stage. 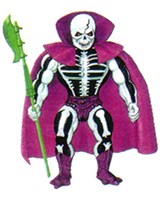 Scare Glow was a surprisingly good figure at the line's end. Some fans interpreted Scare Glow as being Skeletor's wraith brought to life; others saw him as a spectre pulled from another dimension to serve Skeletor. 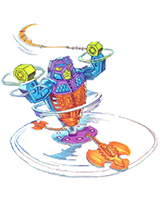 Twistoid was an evil spinning top who struck enemies with his whirling weapons. 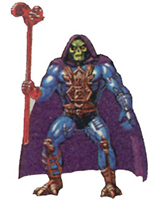 Laser-Light Skeletor was a poorly designed variant released only in Europe. 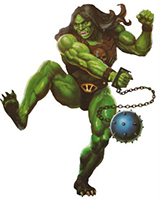 Megator was an evil giant who was released only in Europe.