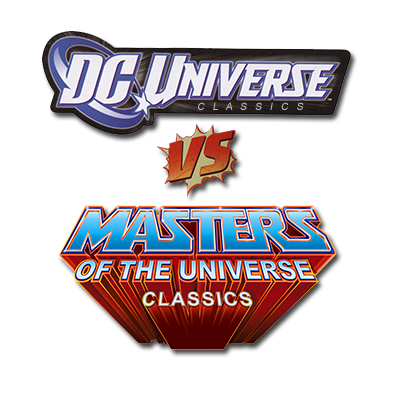 Mattel decided to test the retail market with a series of two-packs which were sold only through Toys'R'Us in the US. Each pack contained one DC Universe Classics figure and one Masters Of The Universe Classics figure. They were variations on figures released on Matty Collector. That was the most contentious issue, because fans had hoped that the whole Classics line would be available to all collectors through a single source. Limiting sales to one retailer meant many fans never had the chance to collect these figures.

Even though Toys'R'Us is an international company, they would not sell to overseas customers, even through their website. It became necessary for collectors to buy the packs from Ebay sellers. However, it was apparently difficult even for US customers to find some of the packs in their local Toys'R'Us stores. There seems to have been a misjudgement in the quantity distributed. Whatever the truth is behind this dabbling with the retail market, the two-packs were ultimately short-lived.

While it was a good idea to try to bring the Classics to a wider audience, one has to question the appropriateness of selling the figures paired with figures from another line. While some fans may have been interested in both DCUC and MOTUC, it is certain that many were not. That effectively put customers in the position of buying one figure for the price of two.

I have no doubt that the line would have fared much better if the packs had been He-Man versus Beastman and Skeletor versus Man-At-Arms, rather than the awkward hybrid products that fans were supposed to accept. We have no idea how many sets actually ended up being sold, and doubtlessly Mattel would claim the experiment a success, but it is not hard to realise that things could have been done better.

It really is a shame that these variant Classics figures were not widely available to international fans or packaged in a much more thoughtful and appealing way. Some of the figures were really rather good. It is rather frustrating knowing that the colour schemes were of particular interest to collectors, but the target audience was the US mass market. It would have been lost on many Toys'R'Us customers that the paintwork for several of the figures was chosen because the colour schemes were used in MOTU comics in the 1980s.

In all seven sets were released, but sadly the seventh (Bizarro versus Battle Armor Faker) received minimal circulation and is now very difficult to find, even on Ebay. Battle Armor Faker would have been a very popular variant had he been sold on Matty Collector, because he was a new and long wished for variant. This is the list of the seven packs.

Fortunately I have managed to acquire the two figures which were of the most interest to me. The Mer-Man figure with his light blue paintwork was created because this colouring was used in one of the earliest MOTU minicomics, The Vengeance of Skeletor. Blue Mer-Man therefore goes way back to the earliest days of the original MOTU line.

I also have the Stratos variant which features blue wings and a red backpack. This is an important addition to the collection, because this was the variant which was widely distributed when the original line was released. I do not know how many blue-winged Stratoses were released compared to the 'correct' red-winged version. I only have the variant version in my original MOTU collection, so having the Classics version brings things full circle.

One of the good things about the demise of the TRU line is that future variants of important figures (assuming they will be made) will have to be released through Matty Collector. That, of course, depends on the success of the line over the next couple of years.