One of the great aspects of the Classics line is finding out about the elusive parts of Masters of the Universe history. One little known character who appeared as a new figure in 2016 was Anti‑Eternia He‑Man. This was a chase figure, meaning he wasn't released as part of the subscription and was only made available for sale briefly. (I detest the concept of chase figures, but that's another matter.) The character was originally known as Anti‑He‑Man.

The Compendium helps fill in the gaps about this figure. (If you haven't bought yourself a copy yet you should.) He made his first appearance in the MOTU canon in a German audio play called Anti‑Eternia in 1985 that was sold on cassette tape. You can hear the recording and read an English translation at He‑Man.org. MOTU material was licensed by Mattel around the world. It's only relatively recently that some of this work has found a broader audience, thanks to some dedicated enthusiasts and webmasters.

The figure is, of course, a He‑Man variant. He's a negative version of He‑Man, which is reflected in his title - the most evil man in the universe - and the colour scheme. The flashes of red are just enough to work well against the black. The hair is shaded in a similar fashion to Faker's, which is apt. The eyes are suitably demonic. For a variant this is a great looking figure. Black versions of He‑Man's weapons - the power sword (full version) and battle axe - are included, along with the round shield with red inserts.

But that's not all. We also have malevolent black versions of Castle Grayskullman's shield and He‑Ro II's sword. These work really well with the figure, and give additional display options. I've often said that nostalgia is what makes the Classics special, and Anti‑Eternia He‑Man is one of those obscure characters from the early days of the property who deserve to be included in the line, even if very few of us knew he existed back then. Finally, I want to include a great image I stumbled across online. Artist credit: Simon Eckert. 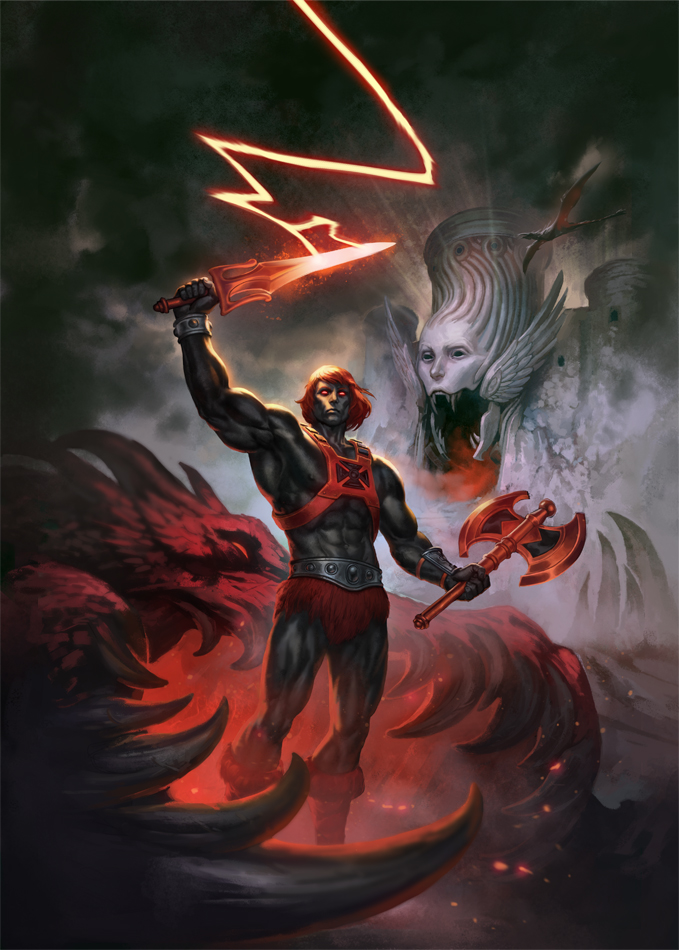