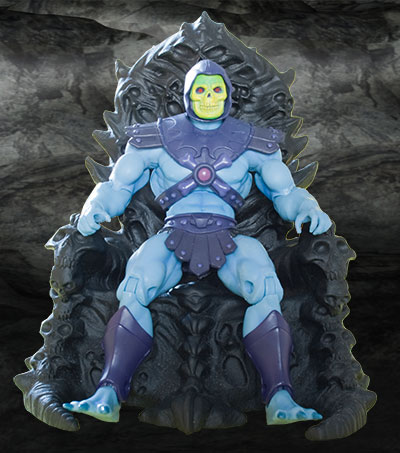 This page is a chance to show a few of the accessories and props which can be used to complement the Classics figures. Some items have been produced by Mattel in the form of Weapons Paks specifically for the toy line. The very first Weapons Pak was, of course, released as part of the original toy line in the 1980s. You can read about it here.

The photograph on the right shows Skeletor sitting in a skull-encrusted throne. This throne is not a Mattel product, nor is it designed for the Classics, but it can be used as it is more or less the same scale. It was released with the Marvel Select Mephisto figure. Mephisto is no longer available, but you can see a photograph here.

Jeremy Sung's Spy Monkey Creations company has also been releasing some accessories for the Classics line. These have become popular among fans and I shall be reviewing several of his products here. You can see the Spy Monkey website by clicking here.

The Four Horsemen are, of course, the designers of the Classics, but some of their non-Classics products can be used with the line. I have written about the Four Horsemen here, and you can visit their Store Horsemen website by clicking here. Several of their designs are available for purchase from the site.

The good thing about accessories and props is that you can personalise your Classics collection by choosing the ones you like. It is worth keeping an eye on other toy lines for Classics-compatible products. Some fans also make their own props! I hope you enjoy the photographs on this page.

Now we all know that Tytus (the first Classics giant and quite possibly the worst figure of the line) was sold with a ridiculous vacuum-cleaner shaped object. This wasn't the fault of the Four Horsemen; they were simply replicating the daft weapon that the original figure was released with. The challenge has been to find an alternative weapon that looks reasonable. The sword you see above left is from the Four Horsemen's Ramathorr figure.

The alternative armour and sword for Mer-Man, shown above right, is from Mattel's second Classics Weapons Pak. This set is known as the Great Wars Assortment. The dull gold colour is a tribute to the 2002 version of Mer-Man. I don't think this is a particularly good look for Classics Mer-Man, but hopefully 2002 fans will be pleased. Of course, there are no rules about which figure the accessories should be used with.

The photographs above show evil warrior Faker with some new accessories. The axe on the left is the Doppelganger version of Spy Monkey's Witching Axe of Ruination. The Spy Monkey designs are generally larger weapons than the Mattel originals. The Witching Axe is a nice design which works pretty well with Faker. The axe and shield on the right are from the Great Wars Assortment. He-Man weapons in Faker colours makes perfect sense. The original Faker only had a duplicate sword, but now he is fully equiped for his magical transformation into He-Man's evil double.

Both of the weapons shown in the photographs of Skeletor above are from Spy Monkey Creations. The Skeletal version of the Witching Axe of Ruination gives Skeletor his first battle-axe. The sword is called the Blade of the Demon King. The handle and guard are nicely done, and I like the bat wing shape of the blade, although I'm not sure about the translucent plastic. I think this is Spy Monkey's best design.

Trap Jaw is the main accessory figure of the Classics line. It is therefore fitting that extra accessories have been designed for him to increase his collection of weapons and devices. The photograph on the left shows the laser bow and pistol from Spy Monkey's Dark Arsenal of the Space Pirate collection. On the right is the Roboto-style gripper from the Great Wars Assortment and the scimitar sword from the Dark Arsenal. Some of the items from the different sets can be linked together to create new weapons, such as a laser crossbow or rifle. The only problem is that Trap Jaw's left hand is not fully closed, so the weapons cannot be posed very well.

The photographs above show why the Weapons Pak Great Wars Assortment was an essential purchase. Randor's gold spear should have been released with the figure, because vintage Randor had a gold spear, but it wasn't. The appearance of a gold spear has finally made it possible for vintage fans to have a complete King Randor. This is the spear that Randor hurled through Faker's chest in The Search for Keldor minicomic.

The green armour and stand shown with Zoar, who was himself Classics Teela's accessory, are welcome additions. These, too, should have been released earlier. Screeech was fully equiped when he was released as Evil-Lyn's accessory. The Zoar armour and stand are in the original minicomic illustration colours, which is a good tribute. The vintage toy Zoar's equipment was red.

The four images above are Spy Monkey's promotional pictures for the accessories featured on this page. The company has already released several other accessories, including shields and techno-swords. The accessories have become very popular among Classics collectors. My view is that the products are good but not great. There are a few rough edges from the machining, and some of the designs are fairly basic. Most importantly, they are expensive for what they are. The current prices are 10 US$ for individual items and 15 US$ for sets like the Dark Arsenal. These are high prices when compared to the 12 US$ for the Weapons Paks. 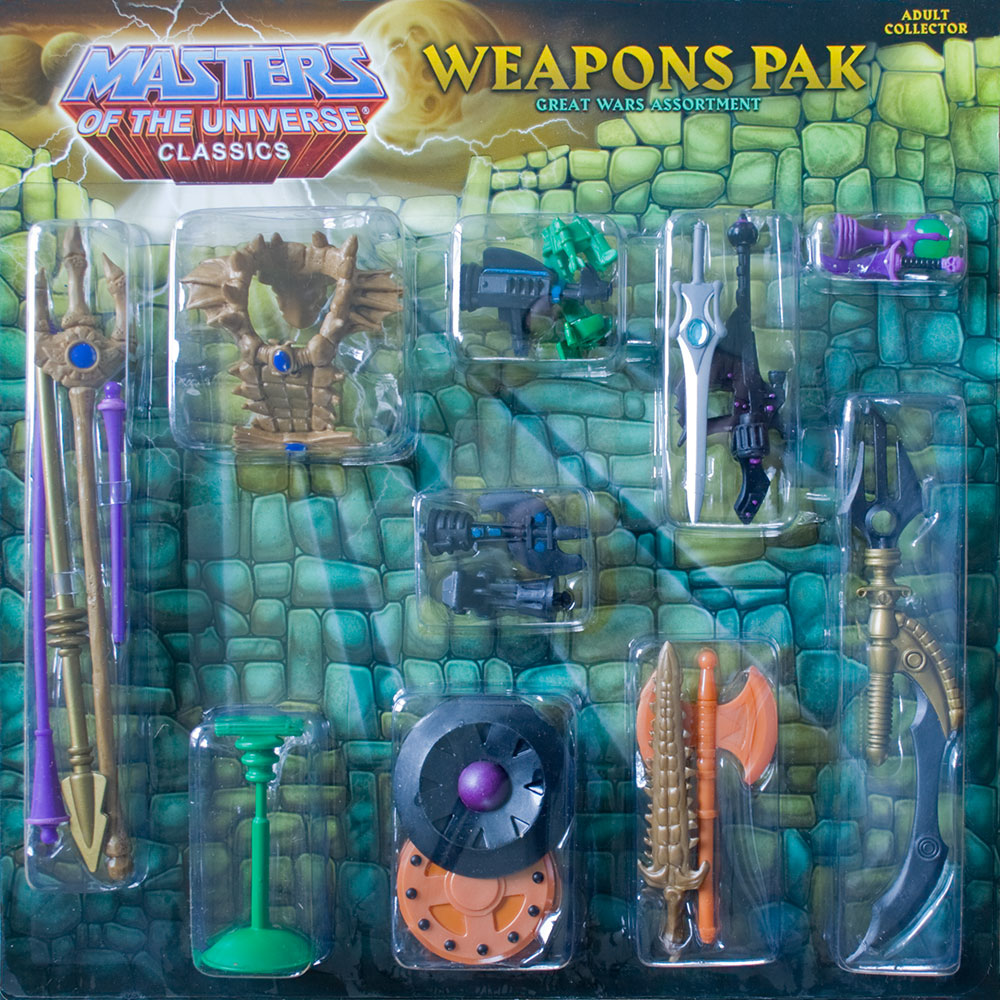 I mentioned above that the Great Wars Assortment was the second of Mattel's Weapons Paks for the Classics line. The first was called the Ultimate Battleground Assortment. It included a replacement armour set for Beast Man and a blue version of He-Man's axe, like the vintage Weapons Pak. The set was rather disappointing though, because the colour choices were mostly horrible. The Ultimate Battleground title didn't really fit the mauve armour and weapons found in the pack.

The Great Wars Assortment is a better set with items which should appeal to fans of different eras. The black and purple versions of Optikk's equipment are poor, but most of the other items are good choices, and the colour schemes should appeal to 2002 fans. There is even a two-tone version of Adora's sword for the She-Ra fans. The inclusion of Roboto's accessories in Trap Jaw colours is probably the best idea in the set, but my reason for buying the pack was to kit out Randor and Zoar.

Classics Weapons Rack is the best accessory set so far, because it has no silly colours, it has the link to the vintage line, and it fits in with the modern line very well. Below are two photographs of the set. 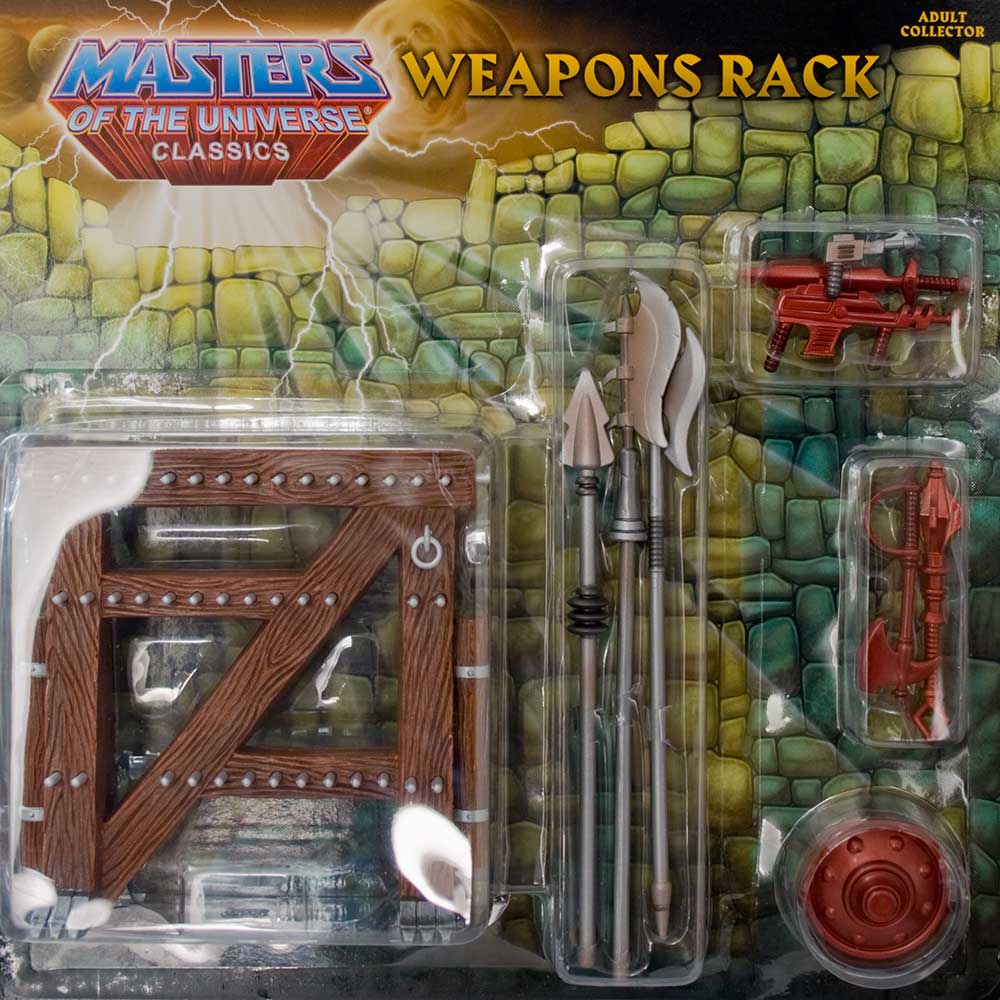 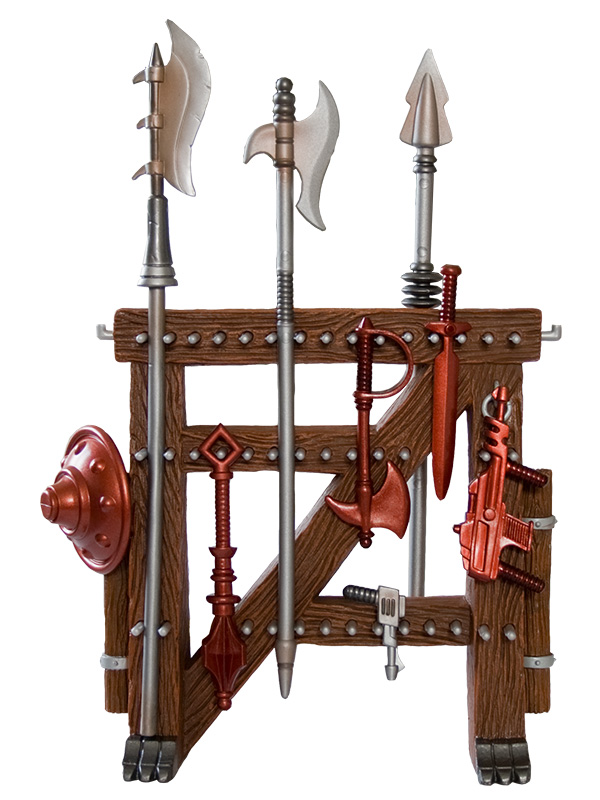