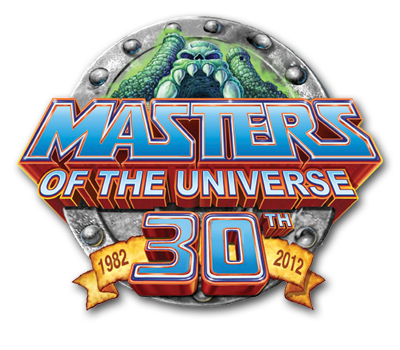 30 YEARS OF MASTERS OF THE UNIVERSE

In 1982 we saw the first figures of the original toyline being released, and they became an immediate success. Here and there you may find evidence of copyrights and trademarks being registered the year before, and some of Mark Taylor's concept sketches are dated 1981. The necessary product development time has therefore not been included in the anniversary timeline and the product release year has been chosen instead.

Being fussy over whether to use the year of conception or the year of first production is to be distracted from what really matters. The Masters have been around for almost as long as the majority of their fans, and it is great that a property which we enjoyed so much as children still exists and is still being supported today. In fact it is the presence of such a large community of fans which influenced Mattel's decision to experiment with the Classics - an experiment which has proved to be a success.

It has been interesting to watch the development of the new line since its start at the end of 2008, and a degree of curiosity lingers over where the line is going next. Fortunately the line has so far concentrated mostly on characters from the original toyline. While this may not please fans of the Princess Of Power (She-Ra) and He-Man (New Adventures) spin-off lines, who want to see many more of their favourites included, I think it has been the right decision.

Of course the line will not and cannot stay focussed on the original toys forever. We still have quite a few Vintage characters to go, but many of the fan favourites have been made now. That means we are likely to see more POP and NA figures, as well as characters from the Filmation cartoons now that Mattel has acquired the commercial rights. We will probably see more concept characters too.

This page features photographs and short reviews of all six anniversary figures.

FEARLESS PHOTOG. During the days of the Vintage toys, Mattel ran a competition for youngsters to design their own Masters Of The Universe figure. That competition was won by Nathan Bitner with his Fearless Photog design. Mattel finally honoured their promise and produced Photog as the first anniversary figure. It isn't the most elegant of designs, but it is imaginative, and it is great that Nathan's concept has finally been turned into a figure.

DRAEGO-MAN. This is the new anniversary figure from the Four Horsemen. Draego-Man seems to have become the majority of fans' favourite anniversary figure, and I expect he will remain so. He is obviously something of an indulgent design with his huge wings and tail, but if the designers of the Classics figures are not entitled to a little indulgence then nobody is. Draego-Man is a welcome addition to the Masters.

THE MIGHTY SPECTOR. Brand manager Scott Neitlich's childhood MOTU design has met with enormous controversy. Some fans dislike the figure just because of its design, but others feel that Scott is not entitled to have his own figure included in the line. Bearing in mind the amount of effort that Scott has put into getting the Classics established, I think such a view is unfair. Having 'The Mighty' as part of the name seems unnecessary, but I actually like this figure and have no issue with his inclusion in the Classics.

SIR LASER-LOT. Surely a contender for one of the most boring Classics figures, Sir Laser-Lot is the creation of Geoff Johns, who is apparently well-known in the comic book world. Johns has a background in writing superhero-type stories, which is probably why his creation looks suspiciously like Superman with a silly hat. Unfortunately the figure isn't helped by its bland paintwork and the ridiculous pink weapons and helmet plume. It would have been nice if this anniversary slot had been filled with something original and imaginative.

CY-CHOP. Terry Higuchi of Mattel came up with the design for Cy-Chop. The figure has the distinction of being the one that could have been so much better but ended up being rubbish. The ridiculous over-sizing of the scissor hands makes Cy-Chop look absurd. It's a repeat of the style that contributed to the failure of the 2002 MOTU line. And it's such a shame because this could have been a really good character. The colours are good, and the transparent torso which reveals internal organs is an imaginative touch. But those hands... why couldn't they have been smaller weapons instead?

CASTLE GRAYSKULLMAN. Well at least we finished the anniversary series with a spectacularly good figure! Create A Character Contest winner Daniel Benedict came up with a very good design that fits perfectly into the world of the MOTU. Castle Grayskullman has become extremely popular among fans, and deservedly so. This is a welcome addition to not only the anniversary set, but also to the Classics line as a whole. It's a fine example of how one can come up with new ideas while respecting the origins of the MOTU. Congratulations, Daniel, on becoming part of MOTU history. You can see Daniel's Castle Grayskullman website by clicking here.